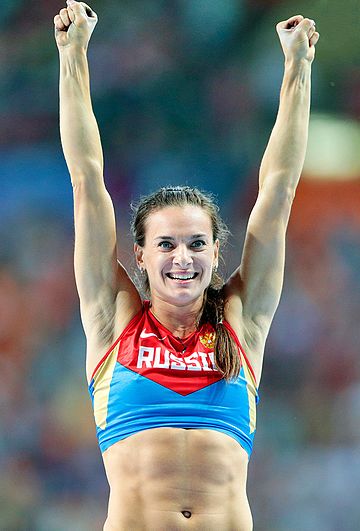 It was refreshing to hear Russian pole vaulter Yelena Isinbayeva talk yesterday in a news interview. The amazing thing is she sees the big picture of what the pro homosexual propaganda is doing. She does not want to see her country corrupted like Europe and the USA with other liberal countries following the same way.

Putin had put into place at the beginning of this year measures to protect children from any information about homosexuality. Read More https://www.theguardian.com/world/2013/jun/30/russia-passes-anti-gay-law.

He is a man who can see the bigger picture and how supposed democratic countries like here in the UK and USA are being corrupted by liberal left politics listening to aggressive propaganda from the homosexuals. Even Putin can see how Christian churches are being attacked by anti-Christian persecution. Read More https://www.lifesitenews.com/news/world-leaders-should-unite-to-end-anti-christian-persecution-vladimir-putin

Nations around the world and here in Scotland, through media, and in every aspect have glorified homosexuals and, although, I know God loves the homosexual person the sexual act is an abomination to Him.

I have no problem with the person who is homosexual; I hate the homosexuality because of what it does to people and the whole of society.

I spoke to a friend of mine from Manchester who preaches on the streets in that city. He has been threatened and his wife and kids with rape if he does not stop preaching about the sin of homosexuality.

I have a Christian friend in Wales who is married with children, he spoke of sexual encounters with men and thought he was going to hell. I had to convince him that we have all committed sin and in need of forgiveness. His sin of homosexuality was not beyond God’s grace.

We are sinners saved by grace and like Paul, I am the chief of sinners. After decades of his guilt, we prayed, and my Welsh friend has a new freedom and I have encouraged him to keep strong and read through Psalms and pray when attacked by these temptations.

I heard David Wilkerson speak years ago, to me he was a modern-day Zephaniahs, who was willing to stand up in the pulpits and to simply share the Word of God.

He, like me, had no problem with lesbian, gay, bi-sexual, and transgender people but he knew their lifestyle was sinful. Many attended his services. He said over a matter of months, saw the transgender people disappearing, but he found out they were convicted by the Holy Spirit through hearing the Gospel and became saved and changed their ways.

David Wilkerson spoke this prophecy the year I was born. Watch it all but watch out at 14.00 minutes and see what is happening today.